Since the 1980's, MeiVac's US Components DIvision has acquired multiple exclusive manufacturing and distribution licenses for patented planar magnetron sputter sources from two prominent "Silicon Valley" research laboratories. With over 6,000 of these sources delivered worldwide, the US Components Division has become known as a leading manufacturer of sputter deposition sources, substrate heaters and associated hardware. Introduced in the 1990's, one of the sources, the MAK, rapidly became a standard in the industry. Noted for its simplicity, ease of use and resulting high reliability, the MAK source has been designed to present the smallest profile possible and deliver higher deposition rates than any comparable sputter sources. Because of its popularity, the MAK source has been used in the development of many of today's thin film processes. The MAK source is produced at MeiVac's San Jose, California U.S.A. facility.

The MeiVac team has been serving the vacuum industry for more than 30 years. Founded as Comptech, the company established itself as a multi-faceted vertically integrated vacuum systems, components and services supplier. This capability continued to grow as the company was acquired by Alcatel in the 1980's and then re-acquired and renamed MeiVac in the 1990's. In May 2006, MeiVac acquired the Sputter Source business of US, Inc. and combined it with its Throttle Valve business to form the MeiVac US Components Division. Not only did this acquisition give MeiVac a strong addition to its product portfolio, it also gave the company access to an existing worldwide distribution network.

Typically, a substrate (the item to be coated) is placed in a vacuum chamber opposite a target (made of the coating material being sputtered). The chamber is evacuated and then backfilled with a process gas (Argon). The gas is ionized with a positive charge, which creates plasma. Resulting ions are strongly attracted to the target, which carries a negative charge. The effect is a physical process similar to the interaction of billiard balls in a confined space. As the relatively large argon ions impact the target, atoms/molecules of target material are physically removed from the target. Due to it's close proximity, a a majority of sputtered atoms/molecules land on the substrate. The intent is for this material to arrive at the substrate with enough energy to form a thin, strongly attached film, one monolayer at a time.

Cross Section of a Planar Magnetron 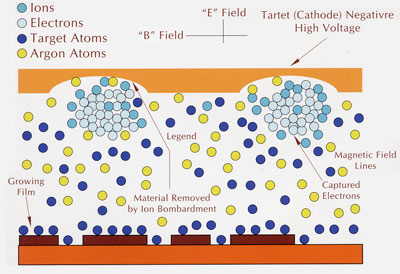 In conventional diode sputtering, electrons are created that escape the effective plasma area near the target. Some fly around the chamber creating undesirable undesirable side effects, such as heating the tooling. A magnetron-sputtering source addresses the electron problem by placing the magnets behind, and sometimes, at the sides of the target. These magnets capture the escaping electrons and confine them to the immediate vicinity of the target. This increases the ion current (density of ionized argon atoms hitting the target) by a factor of 10 over conventional diode targets, resulting in faster deposition rates at lower pressures, which help to produce cleaner films.

Sputter efficiency of the material

Target is retained by the magnet structure with a simple keeper. Target exchange is accomplished in moments without disassembly. MAK sources are designed to overcome limitations commonly found in other sources:

Water channel is NOT part of the high voltage path

Magnets are NOT in the water channel

Target requires NO clamping or bonding to cathode

Magnetic Materials may be sputtered with the standard magnetic assembly in most applications.

Operates in DC or RF modes

MeiVac offers a number of options to assist in achieving desired results. The standard model MAK source is mounted on a 12"(300mm) long support with a position clamp included. Water and power are contained at atmospheric pressure within this support. A 0.75"/19mm Quick Coupler vacuum feedthrough is required to integrate the source in the vacuum system and position it at the correct source to substrate distance. 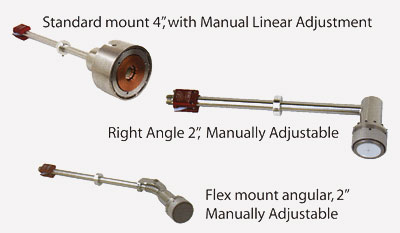 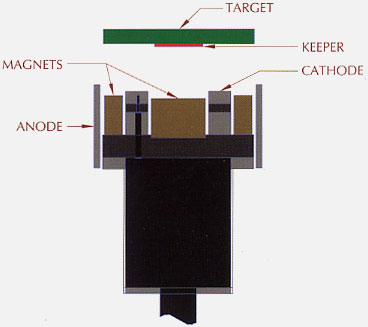 Gas injection, to deliver process gas directly to the area of the target, reducing residual gas interaction with the sputtering process. 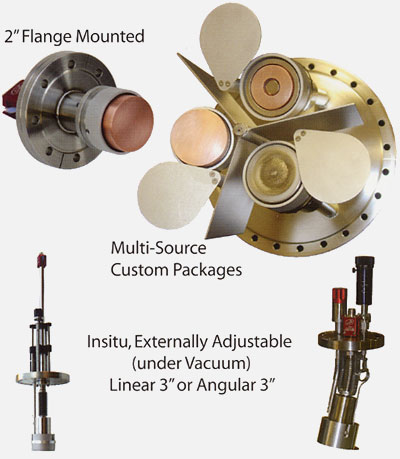 External adjustment of source to substrate distance or angle 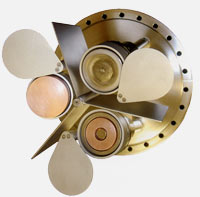 Two or more guns on a flange